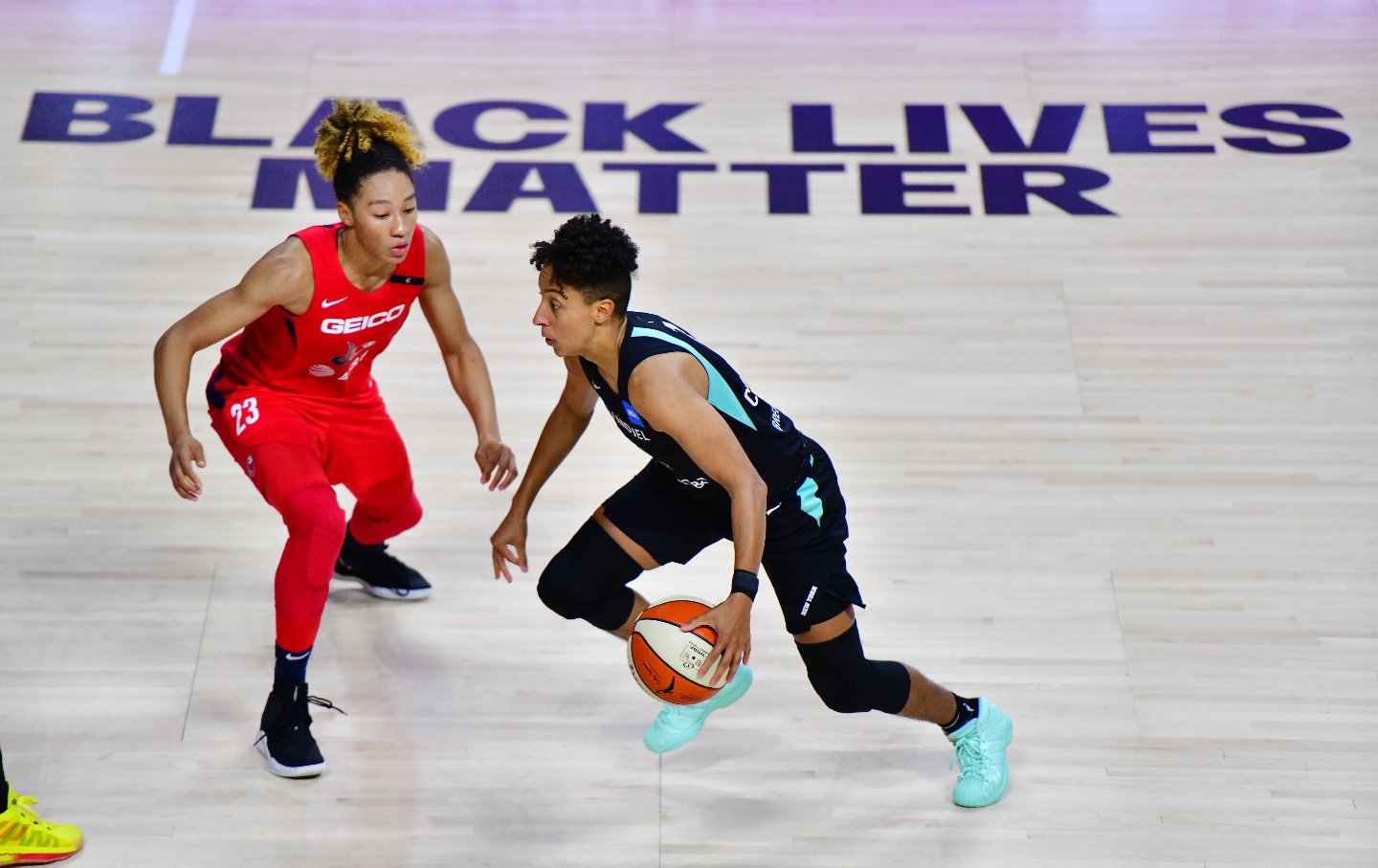 Layshia Clarendon, right, and Aerial Powers during a game at Feld Entertainment Center in August of 2020 in Palmetto, Florida. (Julio Aguilar / Getty)

Sports Illustrated certainly got the headline right. This year the magazine gave its much celebrated Sportsperson of the Year award to “The Activist Athlete.” During a year where the wall between politics and sports was not only breeched but obliterated, it was really the only choice. After the police murder of George Floyd and the massive demonstrations that followed, athletes stepped up. They took to the streets. They pushed for people to vote. And they defended their right to speak out.

The athletes that Sports Illustrated chose, however, say more about how the minders of sports are attempting to set the parameters—and the historical memory—of what proper athletic activism looked like in 2020. The SI editors wrote, “Our Sportsperson of the Year award goes to five men and women who in 2020 were champions in every sense of the word: champions on the field, champions for others off it.”

They included Kansas City star quarterback Patrick Mahomes, who pressured the NFL to recognize the right of players to protest for Black lives; Breanna Stewart of the WNBA who spoke out against bigotry while leading her Seattle Storm team to a title; LeBron James for leading voter registration drives; Naomi Osaka, the tennis star who elevated her game while elevating the names of people killed by police; and Chiefs’ lineman Laurent Duvernay-Tardif, who won a Super Bowl and then “left the NFL to join the front lines of the battle against Covid-19.”

These are all worthy people. But as @saqno1 reminded me on Twitter, Noam Chomsky put it perfectly when he said, “The smart way to keep people passive and obedient is to strictly limit the spectrum of acceptable opinion, but allow very lively debate within that spectrum.”

I’d rather celebrate those who operated outside of this spectrum; the athletes who did not accept the parameters of approved activism. We should start with those who helped us collectively expand our minds beyond the “acceptable opinion” imposed upon us about what protest should look like.

I would start in fact with the player strikes in August after the police shooting of Jacob Blake in Kenosha, Wisconsin. These were critical because they introduced the power of labor into the movement for Black lives. The strikes came at a moment when the labor movement was largely absent from the summer’s historic demonstrations. To represent that struggle, I’d go with George Hill of the Milwaukee Bucks, the first team to strike, setting off a chain reaction through just about every sports league. As Hill said,

Until the world gets their shit together, I guess we’re not going to get our stuff together…. We’re down here playing in the bubble to do these things for social justice and all that, and to see it all still going on and we’re just playing the games like it’s nothing, it’s just a really messed up situation right now.

Hill was brave enough to be critical of even being in the Bubble playing games while Black people were being shot in the back, saying, “We shouldn’t have came to this damn place…Coming here just took all the focal points off what the issues are. But we’re here. It is what it is. We can’t do anything from right here. But definitely when it’s all settled, some things need to be done.” These strikes helped refocus the world’s attention on Jacob Blake. They were called off too soon, as players were pressured by President Obama and franchise owners to channel their anger into electoral activity and team social justice committees.

The groundwork for the politics of resistance that emerged from the Bubble were laid by the NBA’s Bubble-mates in the WNBA. There are many WNBA players one could laud. They were front and center every step of the way on the issues that animated 2020. The players forged a different path of struggle when they directly challenged WNBA franchise boss, Atlanta Dream Kelly Loeffler and called for her removal from the league.

Loeffler—in the middle of a pandemic and massive multi-racial demonstrations—openly ran for Senate on a cynical, and deeply racist platform of demonizing not only the Black Lives Matter movement but also her own players for supporting the struggle. In response, her players turned the tables and not only called for the people of Georgia to vote for her opponent, Ebenezer Baptist Reverend Raphael Warnock, but also for her to be catapulted from the league, in effect fired. As their union tweeted, “E-N-O-U-G-H! O-U-T.” Atlanta Dream player Renee Montgomery—who was taking the year off to focus on social justice initiatives—asked for a meeting with Loeffler to discuss, a meeting that Loeffler rebuffed.

There were also players in the WNBA like Layshia Clarendon who were not only calling for Loeffler’s removal and defeat but pushed for even newer parameters, saying, “Being Black and Non-Binary Is My Superpower.” Having a non-binary player not only be open about their identity but also having announcers respect their pronouns felt like new ground was being broken beyond all previously known boundaries. From calling for a boss to be fired and being a league that shows it can celebrate Black LGBT, non-binary people, the WNBA perhaps deserves its own category for making its mark on 2020.

Connected to the WNBA ecosystem but also utterly singular and distinct in her journey, was the great Maya Moore. I don’t see how any celebration of the 2020 activist athlete could be complete without lauding Moore. Perhaps the greatest player in her sport. Moore left her sport in her prime two years ago to challenge the racism of the criminal justice system and fight for the freedom of a wrongly convicted man name Jonathan Irons. Jonathan Irons finally won his freedom in 2020, calling Moore his ”guardian angel.” That Irons and Moore were also married this year is a beautiful coda on the story. It is also frankly incidental. Maya Moore brought the love of a life-affirming struggle to 2020 all while putting the games we play in stark perspective.

While Hill pushed for the Bucks to strike—for radical action in the face of racism—Boston Celtics forward Jaylen Brown pushed for a radical politics. Brown, like many athletes this year, took a knee during the anthem. When asked to explain why, he quoted someone outside the world of sports, saying, “Angela Davis once said that racism is so dangerous not because of individual actors but because it’s deeply embedded in the apparatus. I think about that quote a lot when I think about the national anthem.”

Brown also took part in marches following the killing of George Floyd, posting his street actions to Instagram. Just 24 years old, Jaylen Brown represents a wing of the struggle beyond LeBron: someone more than a decade younger who sees struggle beyond the voting booth as a path to liberation.

That leaves Colin Kaepernick. I think 2020 was the most important year for Kaepernick’s voice since his exile from the National Football League for speaking out against police violence. Kaepernick is an unapologetic radical in the best sense of the word, in that he is pushing his audience to see brighter vistas beyond the immediate blight that engulfs our lives. Kaepernick made this known after after George Floyd was killed and people protested in historic numbers when he said, “When civility leads to death, revolting is the only logical reaction. The cries for peace will rain down, and when they do, they will land on deaf ears, because your violence has brought this resistance. We have the right to fight back!”

Then as the call to defund the police rose from the streets, Kaepernick curated at Medium a series of articles called Abolition for the People where leading scholars argued for full abolition of the police and the dismantling of our racist system of criminal justice. Writing one of the pieces himself in a series entitled “The Demand for Abolition” Kaepernick wrote,

It’s been four years since I first protested during “The Star-Spangled Banner.” At the time, my protest was tethered to my understanding that something was not right. I saw the bodies of Black people left dead in the streets…. I saw little to no accountability for police officers who had murdered them. It is not a matter of bad apples spoiling the bunch but interlocking systems that are rotten to their core. And systemic problems demand systemic solutions.

As pressure was placed on the sports world from President Obama to the sports owners to the media for athletes to channel their anger at police violence into voter registration, Kaepernick stood against the flow of rocky waters and walked against the political rapids.

These people, Hill, Clarendon, Moore, Brown, and Kaepernick, represent a different manifestation of this year of the activist athlete, something less safely consumable than the choices by Sports Illustrated but perhaps far more important: the desire for the people to enforce their will on a society that is fundamentally broken, not merely with laments but solutions. Striking, protesting, holding up radical theorists, and articulating solutions: Those are my Activist Athletes of 2020. Efforts to throw them down the memory hole, to in effect erase them from the history of 2020, must be fought with ferocity. Their ideas will be needed in the years to come.

For some long-term care residents, vaccine comes too late